I’ve been working on a new series: dissecting the plotlines of t.v. shows, books, and movies to form an ultimate theorem of how writer’s write, and how we can predict exactly what’s going to happen next. You can see my first theory in my (super) old blog post  How to Predict the End of the World, where I teach you how you can predict who the “bad guy” is.

Today I will discuss scary movies and what makes them successful.

So, first thing’s first: a good title. If the title is crap, no one will watch the movie. This is a true fact for all films, but especially for scary movies. Horror on Sycamore Street sounds so much cooler than Bad Stabber-Guy, right? (I know, great example, I made it up myself.)

But what else is it that makes a scary movie good?

Two: characters who aren’t cliché. This is a big one for scary movies because, for the most part, scary movies are all about exploiting the clichés, and this is fine (I know, I just said two different things, stay with me for a second). It’s when the main characters themselves are the clichés that ruins a scary movie. Example: main girl comes across a super creepy janitor. The viewer will automatically suspect him because he’s creepy, right? So he would be the cliché; that’s fine. But when the girl turns out to be a legitimate bumbling idiot blonde who can’t save herself from the real killer–that’s just lame. 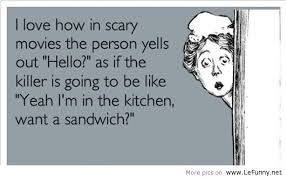 Three: plot twists that people couldn’t see coming. This is also a difficult one because many scary movie plot twists are VERY predictable. Let me give you an example here using The House at the End of the Street. SPOILER ALERT! STOP READING IF YOU DON’T WANT THE MOVIE’S ENTIRE PLOT RUINED FOR YOU!!! BE AFRAID OF THE CAPS LOCK! BE VERY AFRAID!!!!

Was this movie the best scary movie I’ve ever seen? No, but it did have a twist ending I wasn’t expecting. Was I able to predict that Ryan Jacobson (the main male lead) was a killer? Yes, I thought that was pretty obvious. Did I suspect he was keeping fake Carrie-Annes (kidnapping girls to substitute for his dead little sister), um… nope. That was definitely something I hadn’t seen coming. Or when we find out that he’s crazy because his parents made him pretend to be his dead little sister growing up. Creepy! This kind of plot twist keeps the movie interesting and the viewer engaged. It also adds to tension and, in this case, a super creepy atmosphere (which is the best for scary movies! Duh.)

Four: Background music that isn’t overpowering. When the music score sounds like the main character should be running through the middle of a warzone and really they’re just traipsing along in their backyard, we have a problem. It’s common knowledge that when scary movies go silent something BAD is about to happen.

I personally think the scary movies that tend to be the scariest are those with softer music, because by the time you realize “HOLY %&#*$%^ THE MUSIC ISN’T PLAYING ANYMORE”, the bad guy is already upon you and the main character is a corpse, getting stabbed to death, or hit in the head with a blunt object, or tripping into a random wolf trap in their backyard that impales them on wooden spikes. (Wait…what about the last one??? Yeah, that &#*% really happens in scary movies.)

And then the rest is history–as portrayed by Ryan Reynolds’ reaction here:

So these are a few of the things that I think make a scary movie, well, scary. What about you, anything I missed? Let me know.

And keep an eye out for my upcoming post where I begin to dissect Korean Dramas. (Don’t be frightened away by that! You do not have to be a K-drama fanatic or viewer to read and understand the post. Basically, I will be teaching you how to be a psychic when it comes to Korean television. Kind of. Not really…we’ll find out together, I guess).

I love you lots my amazing amigos 🙂