I would like to start off this post with a pr-story admission of how dumb I am. I know I have said this before, you know, that common sense really isn’t my forte. But I thought I would just restate it before I begin; so we’re all clear. Not the reddest apple in the barrel sometimes.

P.S. I would also like to apologize for the fact that this post was supposed to come with pictures, but I am having a super hard time getting them transferred to my computer 😦 Pictures will come, though! Fear ye not, they are on their way! (Just not exactly in this post… Except for the pictures I found on the internet in order to prove my point(s).)

We voyaged to London yesterday as a kind of “field trip” (if a bunch of 20-somethings can have a field trip), and, though exhausting, it was awesome. This was my first time in London–as for many people in my study abroad program–so of course we had to go watch the Changing of the Guards at Buckingham Palace.

Let me just say: I am so glad I am not one of those guards. I have no patience, as many of you might know, and thus would literally start swatting at tourists with my gun/bayonet if given the opportunity. And they want those guards to stand straight, emotionless, and poised? No, I would be fired. If that’s even something that can be done. But since I’m not an English citizen and I’m a female, this is all purely speculation. Obviously–duh, what am I writing? 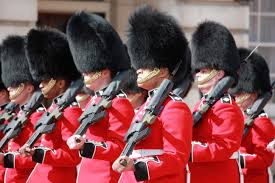 (This photo is the only one I didn’t take, so if it looks impressive compared to the others, that’s probably because it is. Hehe.)

After this we ventured off to Westminster Cathedral which was absolutely stunning, and I may have um, *cough*, teared up a little bit in Poet’s Corner. It’s near the end of the Cathedral (away from the space used for service and where weddings, funerals, and coronations are held. Some of England’s most influential authors are either buried there or have plaques commemorating their achievements; there were even names from other countries–some American–that are honored there. T.S. Eliot, Lewis Carroll, Tennyson, Charles Dickens, Jane Austen, and the Brontë sisters are some of the names of the outstanding authors that are both buried and acknowledged there. It was amazing!

Sorry, not pictures could be taken inside the cathedral, but here are some of the outside!

It was then lunchtime, and we had originally planned on grabbing some sandwiches and sitting out on the steps of the National (Art) Gallery, but it was raining and the gallery was closed. Why was it closed? Because of the protest!!! And I’m not talking about your basic picketing protest; there were hundreds of people there in an organized rally against education and budget cuts. This all happened in Trafalgar Square right outside of the museum and we watched this for a short while as we ate our sandwiches in the rain. I’ll be honest, it was kind of depressing. The rain thing, not the protest.

We then had the option of visiting another cathedral and the Tate Museum (art), but a small group of us decided to get dinner and sit down instead. A few hours later we attended the Globe; a place modeled after the one where Shakespeare plays were originally performed, only that building burned down in the 17th or 18th century, and so this new one stands (as close as possible to the true blueprints) where the old one used to.

We were groundlings which meant that we stood. All three hours of the play. After an already eight hour day of doing nothing but standing and walking around. I’m going to be honest with you. It was truly a struggle. The play, however, was beyond fantastic! We saw Titus Andronicus which was well-acted, hilarious at times, and full of gore. There were awesome special effects where blood spurted from slit throats and hands were cut off (though, sadly, the audience did not actually get splashed. Well, except those groundlings standing directly in front of the stage who got splashed with wine a few times as part of the comic relief).

In order to lighten the mood at the end of the play (because the play itself is pretty heavy and depressing–hint: everyone dies–almost), the cast did a jig to music performed by the live band. It gave me just enough energy to make it back to the bus station before we all collapsed in exhaustion!

So, yeah, that was my day yesterday. My brain is still not working 100% and I have a paper to go write, so I’ll be honest and tell you that I’m probably not going to edit this. If there are mistakes I’m really sorry.

I’m also not a huge fan of blog posts like this, only because I really hate the notion that I might be coming off as braggy. A lot of people from home asked me to post, though, so I feel some obligation to keep those folks updated. Let me know if this came across to you weird and maybe I’ll try a different format in the future. One with WAY more pictures as soon as I can get this freaking camera to work!

P.P.S. I figured out how to make the pictures work, so please disregard anything I said previously that may contradict that. Kay, cool.

P.P.P.S. The title and intro of this post was because it was freezing in London yesterday and I did not dress appropriately. I really need to make the weather forecast my friend, but I’m not that smart. And for some reason I couldn’t find a scarf anywhere when I really needed one on the street by the Globe Theater. Now I see them everywhere. They haunt me.